Complicated Boy and I tried out two photo tricks the other day using my iphone.  The first is the very popular "I am levitating" pose.  This was accomplished by pouring a small amount of water on the driveway and standing next to it.  This one was kind of a fail because his shadow appeared off to the side and I had to use a bit of the ole photo shoppe --but go have a couple of cocktails and come back to the screen to look at it again, ok? 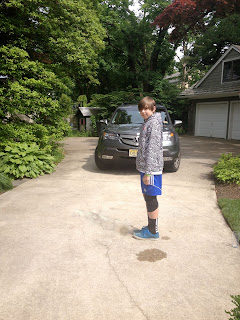 More successful was the "Darth Vader death grip" photo. This is accomplished by holding your hand out and having the subject jump. It took many attempts but I think the results are pretty good. I plan to make copies and write passive aggressive notes on them for my household-- first one is going on that empty toilet paper roll nobody else seems capable of changing. 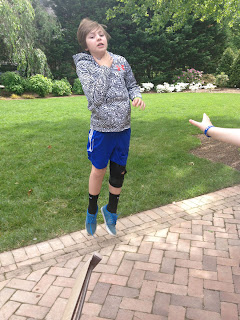 And finally, because I have no life and am easily entertained- much as I hope you are also my friends, I attempted to capture LiLi doing her signature two and half turns and a double back flip:

Like many amazing things in life--it happened off camera.
Posted by Lorrie Veasey at 10:05 AM

I wish my cat did that. I'd be entertained for hours!

I only counted one flip. Just sayin'.