Sexyhusbandomine and I met in March a GAZILLION years ago. That year, for Halloween, here was his costume:

And let me just say girls, that I had my pie with sausage that night.

The next year, we were still a relatively new couple--so we did the "cute couple" costume

Until we got married, at which point cute couples costumes ceased to revolve around sexual innuendo and became indicators of our domestic bliss:

Then we got pregnant and our respective costumes were 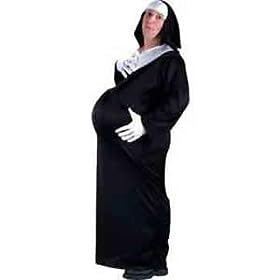 And when I got pregnant again, we went as this

ELEVEN YEARS of marriage later...
And my pizza delivery boy with the six pack abs is going as this:

OMG...I have never laughed so hard at a blog post EVER. You are one of the funniest people on the planet Lorrie...

And I love the new blog...it looks great!

I'm having trouble scrolling beyond the first picture. I never find anything like that in MY pizza box.
L.O.V.E. the blog make-over!! It looks at least 10 years younger!

i feel like i've just been through sex education all over again. thank, lorrie. i was starting to forget. hahahahahahaha!!

What does the back shot of that pizza box look like?

well now look what he's gone and done there...how's he ever going to reach his beverage that way?...Oh!...

Your husband is going to feel pretty bad when some 6'8" overweight construction worker flops his man-boobs on that thing. Or maybe not. I mean, a nice pair is a nice pair after all...

Well, when I first met my husband he was darth vader. woo hoo! yeah. I am married to a star wars nerd. that was ten years ago, next year he will probably want to be yoda or something... another big woo whoo!

OMG! The "baby" costume broke my brain, I think, but in a good way. The pizza costume... Didn't I read a decree by the Pope that proclaimed it a deadly sin?

Very funny!! I love the pizza box!! Some people are so creative when it comes to costumes.

I had no idea sexyhusbandoyours & my sweet hubby looked so much alike when they were younger -- who knew?!!

This is the laugh I needed this fantabulous Friday morning!

(Oh, and I'm working on an avatar this weekend, so that I can be a follower!!)

sweet, innocent daughter'O mine walked up just as I clicked open this post and the pizza box guy was front and center. quite a shock for her sheltered eyes.

When i was 9 months preggers with her, I waited till Halloween day to get a costume together, as I wasn't sure if I'd be celebrating or not till that afternoon. But pretty much all they had left at the costume shop were nun and priest getups. So Doc was a priest, and I was a (VERY)pregnant nun. To round things out there was a Jesus at the party too. Oh Holy Night...

I agree...love the new look. You're all swanky and professional-looking now! Don't forget the little people when you join the big leagues...promise?!?!

In the early days when MIC was still humouring me we went to a Mexican theme dress up party ... MIC went as the bottle of tecquila and I was the worm ...

My first husband loved the change of sex dress up parties ... now that should have sent alarm bells ringing ... will have to share the divorce storry one day ... better done in person with win in hand ...

many hugs you halloween babe - le xoxo oh and an extra one for SHOY and the pizza boy too ... tasty !!

Dear Lord, I laughed my ass off at those, the last one is sooo funny. Add my second fav is the pizza box.

Some people have the wildest imaginations.

Oh how I missed Halloween this October!!! It's just not the same down under.

Wow, I am not that brave. Nice though.