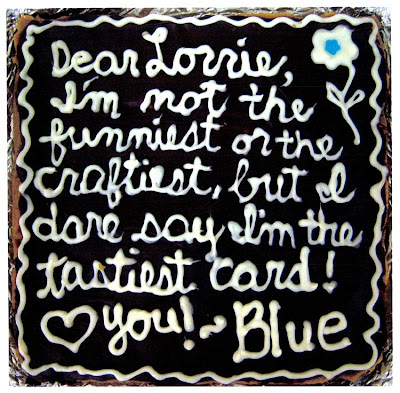 The Fabulous Blue sent me this card to celebrate my 500th blog post. Thank You Blue!!!!

This, chickens, is a GINORMOUS PIECE OF HOMEMADE TOFFEE. Just the right combo of salty and sweet, I began to refer to it as My Precious. At night I dreamt of the way it crumbled into my mouth and melted slowly on my tongue. It was a big box of evil.... Sweet, Delicious Evil.

And yes: I ATE THE WHOLE BLOOMING THING. 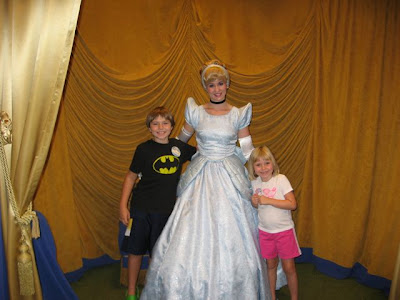 Thanks for your patience as I return to the regular Circus Act of juggling bowling balls, otherwise known as my Real Life. Bowling balls that are ON FIRE.

We had The Best Trip EVAH to Disneyland-which was practically empty because all the kids with Responsible Parents were in school. Miss Thystle will probably be bragging about her jaunt to the Bahamas on her blog--but I'll bet SHE didn't get Buzz Lightyear's autograph or eat a waffle that was shaped like a mouse. Good times, Chickens, good times.

There are some who scoff at the wonder that is Walt's World. They use big words like "consumerism" and "fakety fake fake." Not I. I LOVE THE KINGDOM. I buy into the whole Disney Mystique-I mean, according to my credit card receipts, I REALLY buy into it.

I don't know if I've mentioned this before, but in addition to almond shaped eyes and large front teeth, ComplicatedBoy inherited his Anxiety Disorder from me. Our first day at the Magic Kingdom, he was a bundle of nerves-vowing he would not go NEAR a ride that moved any faster than Cinderella's Merry Go Round. He expressed a fear of drowning on IT'S A SMALL WORLD, and of catching rabies after getting a hug from Chip and Dale. The kid was a nervous wreck. 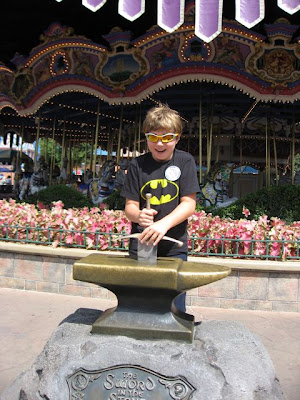 We walked by THE SWORD IN THE STONE--which was a bronze statue of a sword in a stone, with the appropriate plaque about being true of heart and brave of spirit and yada yada. CBoy pulled at it. Nothing happened. The Banana pulled and pulled. Nothing happened. Sexyhusbandomine grunted and sweated and that sword stayed in that stone. And just as we were all set to leave and head towards Adventureland, CBoy took a deep breath and made one final attempt and MY GAWD THE SWORD RAISED RIGHT UP OUT OF THAT STONE! All chrystal and shining and amazing and jeepers cripes honey hand me the freeking camera and then before we could catch a second breath, the sword sunk back into that stone. 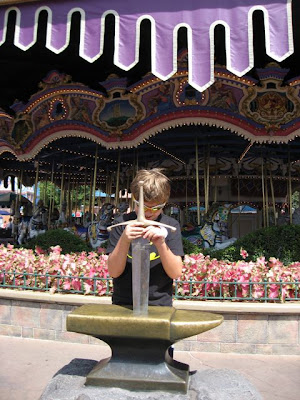 And so we spent the next half an hour and two subsequent returns trying to get that dern sword to rise from the stone again-which it Never Did. We searched for hidden buttons, secret cameras, sneaky Disney employees--we still Do Not Know How in The Heck CBoy pulled that sword out.

" It was because I found my Courage inside" I SWEAR TO GAWD he actually said, cue violins, cue misty eyes.

O Walt Disney i wish i could kiss you on your cryogenically frozen lips.

And then my friends, CBoy lead us to Pirates of the Caribbean and even THE HAUNTED MANSION. Never in the past eight years did I think we would end up spinning through a cemetery together, laughing happily at fears that were now laid to rest.

I am writing this while I should be getting a spray tan as we are jetting off to the Fannypack Paradise known as Disneyworld in just an hour. I'll have LOTS of stories to tell on Monday, but in the meantime let's play ONE WORD ASSOCIATION.

Type a single word into comments that is in response to the word above you. Play as many times as you wish, but you must respond to someone ELSE'S one word response.

On Sunday, random numbers will appear. People who's comments match the number win FABULOUS PRIZES. I mean Fabulous. Trust me on this.

I will start you kids off. 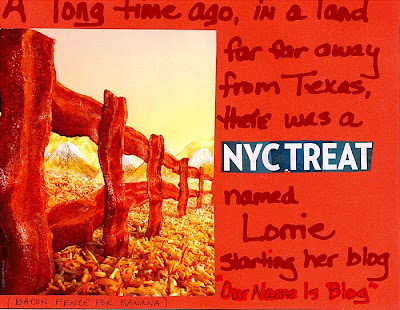 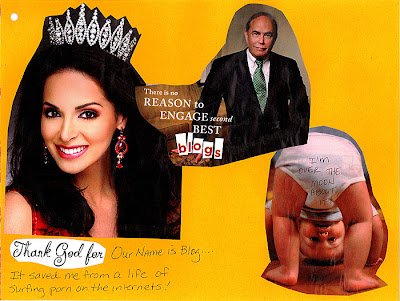 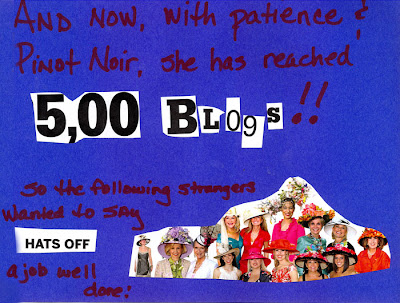 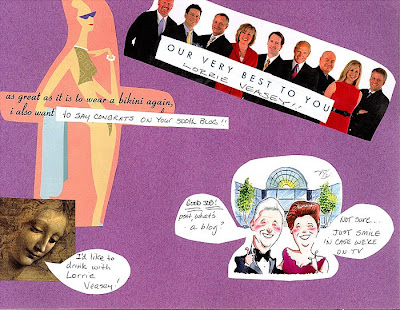 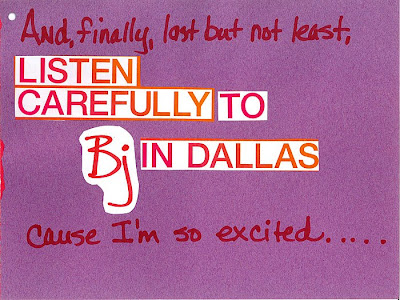 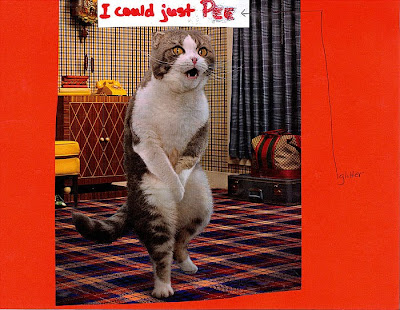 You like me. You really, really like me. But please, no more hanging around my office and breaking into my apartment to steal my underwear, ok?
Posted by Lorrie Veasey at 10:37 AM 11 comments:

A repeat from last year....we have not forgotten.

While other Mommies were instructing their spawn about how to tie their shoes or sound out their letters, I was busy teaching the Fruit of my Loins the difference between Raw Sienna and Burnt Umber. At 18 mos. if you asked the Banana what her favorite color was, she would answer "Magenta." I literally started their artistic instruction when they were both in diapers. 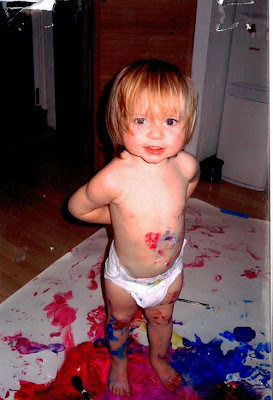 Which explains why sometimes they pooped cerulean blue.

This past weekend we went to the HOWL festival in the East Village. HOWL is a crazy wackadoo art festival with huge murals created in front of your eyes by New York City artists, bands, puppet shows, and the occasional cross dresser. Very fun for The Spawn, very fun for Sexyhusbandomine and me, ( if we can ignore being asked "Mommy, why is that man wearing a bra?" the 1500th time it is asked. )

At HOWL I found what I think is one of the Coolest Things Evah. For $20, you can purchase a six by six canvas from The Six By Six Gallery. After you return your finished artwork, you get a one month gallery exhibition (complete with hoity toity wine and cheese Friday night opening), a 3 month on-line gallery exhibition, and an unprecedented 80/20 split of the sale (you name your price.)

HOW AWESOME IS THAT?!? Mommy can BUY you an art career! Which of course, I did. And I could not wait to see what the Spawn did with their canvases. Banana was called away to help Scooby Doo solve an urgent case that involved the haunting of a deserted mine, but CBoy got out the acrylics and got right to work.

What would my little Rembrant make? What fabulous masterpiece would be produced by my petite Picasso? My mind could ONLY IMAGINE....

It never imagined this. 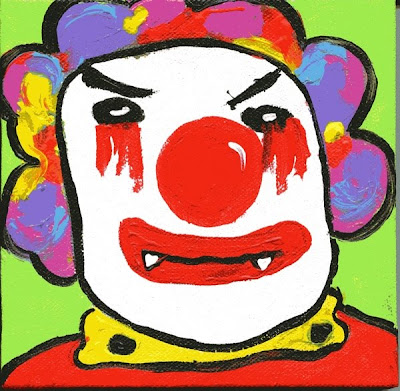 Either I have a highly disturbed child, or he is a GENIUS who realizes at age eight that there is a huge market for really bizarre clown art.
Posted by Lorrie Veasey at 9:48 AM 28 comments:

Dear Cheap Bra from Target-
OK OK UNCLE I give up.... I'll do ANYTHING. Just please Stop. The Torture.
From
Lorrie It itches and pinches Veasey.

Dear Homeland Security:
I know how to make terrorists talk. See above.
Love,
The girl who forgot her passport TWO times in a row.

Dear Followers who left because of my post about drugs
I give my kids WHITE BREAD too.
So shoot me.
Love,
Themycarbonfootprintisfreekinghuge Girl

Dear Readers who wrote such lovely supportive comments on my blog,
I heart you.
For Reals.
Even if so many of you did not send me fabulous cards, like this great one that Jen sent. 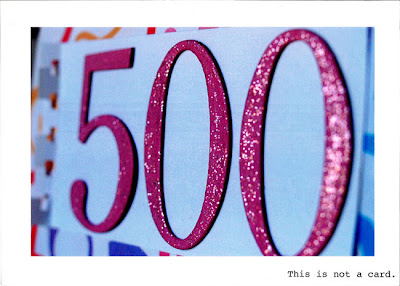 But PS-you can still send me one.
Love, me


Dear Greek Restaraunt on the corner,
That was MY BOSS i brought in to lunch the other day. I don't think the fact that she later spent the evening driving the porcelain bus is going to get me a raise. No tip for you!

Love.
Glad I just had hummus

Dear HBO
I lerves Sookie and Bu-hill. But he's a little too serious sometimes--like he's got a big stake up his butt. Please give Mr. Compton a little sense of humor.
Love,
I should write TV

dear Ex Husband o mine
What were you trying to tell me when you sent me this picture of you and some of your freindfs? 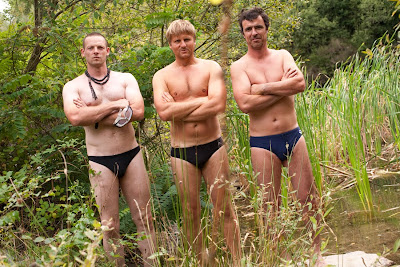