BLoGGiNG THe ALPHaBeT: THe LeTTeR F...

F is for..... FELTED. Felting is: A method for creating fabric by using heat, moisture, and pressure, rather than weaving or knitting. I dare you to look at this collection of Felted Furry Friends and not utter a single "AWWWWWWWWWWWWWWWWWWWWWW." I don't think it can be done. Because there is cute, and then there is: And there is adorable, and then there is: And there is sweet and then there is: ELECTRICITY
I don't understand it. I don't want to understand it. I did once try to detach a plug that was tightly jammed into an extension cord with my teeth. True Story. Not a pretty one (hence the nickname Sizzle Lips.)

EMERGENCY
I have blogged before about my love for Johnny Gage, but I don't know if I also mentioned that if I could create the ideal gynecologist, It would have been this guy: ENVIRONMENT
I started talking to The Spawn about global warming the other day, but upon seeing the growing anxiety on Complicated Boy's face, told them that by the time it became any sort of end-of-the-world problem we would have invented flying cars and would patch the ozone with duct tape. 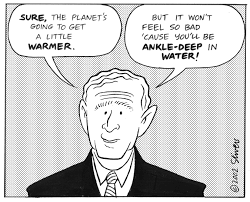 EXISTENTIALISM
An existential map has "You Are Here" written all over it.

E ENTERTAINMENT NEWS
I can't speak in depth about this whole Tea party thing, but ask me a question about Lindsay Lohan. Come on, ask!

ELEPHANTS
Really got the short end of the stick in DAKTARI episodes.

And also in JUNGLE BOOK--Part I and Part II. Perhaps there is a Hollywood conspiracy?


ENCHILADAS
Did you know they just recently discovered and ACTUAL GENE that makes cilantro taste like soap to some people? Thank goodness scientists worked on this. I feel so much safer at my local Mexican restaurant.

EXCELLENT
Remember when we would get big red E's on a paper or test and it meant something good? Now I think most kids will think it is the equivalent of an F plus.

EGGS
There is a person in this office who has a thing for egg sandwiches. Almost every time he comes to work, he has an egg sandwich. I can only tell you that the space reeks like people who have eaten too many enchiladas.

EFFORT
jeebuz but I am Exhausted by thinking up these E words. I would not like to buy a vowel, please. What did I miss? Write your own E word below in comments and EXPLAIN.
Posted by Lorrie Veasey at 10:05 AM 5 comments:

BLoGGiNG THe ALPHaBeT: THe LeTTeR D....

D is for DRESSING.

How bad is it that it's November 1st and 50 degrees outside and my child is still wearing crocs?

Last night, when we were all dressed for Halloween, my son looked at my legs and said: "Mom, what are those things? LEG COVERS?" He is nine years old and had never seen pantyhose before.

Here we all are on the streets of NYC last night ready to Trick or Treat. 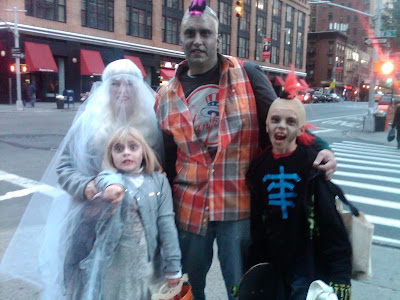 If I were at H I would be writing about our Halloween Hangover.....
Posted by Lorrie Veasey at 9:32 AM 7 comments: