Well folks, like a favorite family pet being put out of his misery...the election season is at last over. All we're left with is the memories of pundits a-punding, pollsters a-polling, and Donald Trump incessantly squeaking about, well, a-nothing.

And unless your internet service provider is Under a Rock, Inc., you're well aware that President Barack Obama bested his challenger Governor Mitt Romney. This news either causes you to hang your head in shame, or to break out into a gleeful jig - and not a bad one, considering you've never jigged heretofore.

Those are the only options - there is no in between in American politics. But there is always another election season to look forward to, and I'm being told it...yes, it's just started. So that's fun. 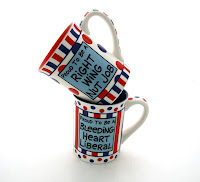 In the meantime, a certain someone has some additional celebrating to do - and that's the winner of the 2012 Our Name is Mud Election Contest! A couple months back we asked our thoughtful readers to tell us what they were proud to be, and why. We asked respondents to be political, or completely a-political. We'd select a winner at random, and he or she would receive a set of our party mugs - Proud to Be a Right Wing Nut Job, and Proud to Be a Bleeding Heart Liberal.

Commenters took to the challenge, with many expressing their sincere gratitude for being part of our nation's esteemed democratic system, while some of our goofier readers got good and silly on us, showing pride for being dog moms, for being procrastinators, even for being glow-in-the-dark. How illuminating.

We ran the entries through our hyper-sophisticated algorithms - the machine chugged and sputtered and smoke did bellow cartoonishly from the exhaust vent - and at long last, a bell sounded, indicating that the choice was made! We waited with anticipation as out came the triumphant comment:

Well put, Diana. That's a sentiment both sides of the aisle can share, and a welcomed reminder that saying something is always better than saying nothing. You rule, America rules, and we'll fire off your prize as soon as you get back to us with a shipping address.

And while Diana has the bragging rights, we're flush with generosity today and want to offer up the same mug set to a couple runners up.

Meaghan and rpc - thanks for giving us a chuckle. Please reach out with your shipping info and you'll be Mud-mugging in no time.

Thanks to all for participating! Time for us to get working on our 2016 Election Contest - this Christie/Clinton matchup is going to be crazy!
Posted by Lorrie Veasey at 3:43 PM 2 comments: